It had been announced as an edition of the Bravìo delle Botti dedicated to the 50th anniversary of the landing of the first man on the moon, and the presentation of the cloth on Sunday 18 August did not betray the expectations: the contradaioli of Montepulciano were literally “bewitched by the moon” to the unveiling of the work created by the artist Stefano Palermo, dedicated precisely to this historic event. In the presence of Giulio Pavolucci, Regulator of the Magistrate of the Contrade, Michele Angiolini, Mayor of Montepulciano and Gianluca Fé, councilor delegated to the Bravìo delle Botti, the Cloth was officially presented which will be delivered to the winner of the contest between the pushers next Sunday.

The afternoon at the Poliziano Theater began with the prize dedicated to the Sienese artist Cesare Olmastroni, established last year to remember the author of the clothes of the 2015 and 2016 editions, a figure particularly appreciated by the community and remained in the heart of the districts of Montepulciano . This year’s edition of the award, presented by his son Duccio Olmastroni, was awarded to the artist Daniele Brizzi born in Montepulciano.

On this occasion, the new flags of the Sbandieratori and Tamburini Group of Montepulciano, designed by Gabriele Torelli, and the new costumes of the master of ceremonies and the attendants of the procession of the eight districts, made by the costume designer Noemi Grottini were presented, taking as inspiration the pictorial works present in the Montepulciano’s museum and imagined as guardian angels. 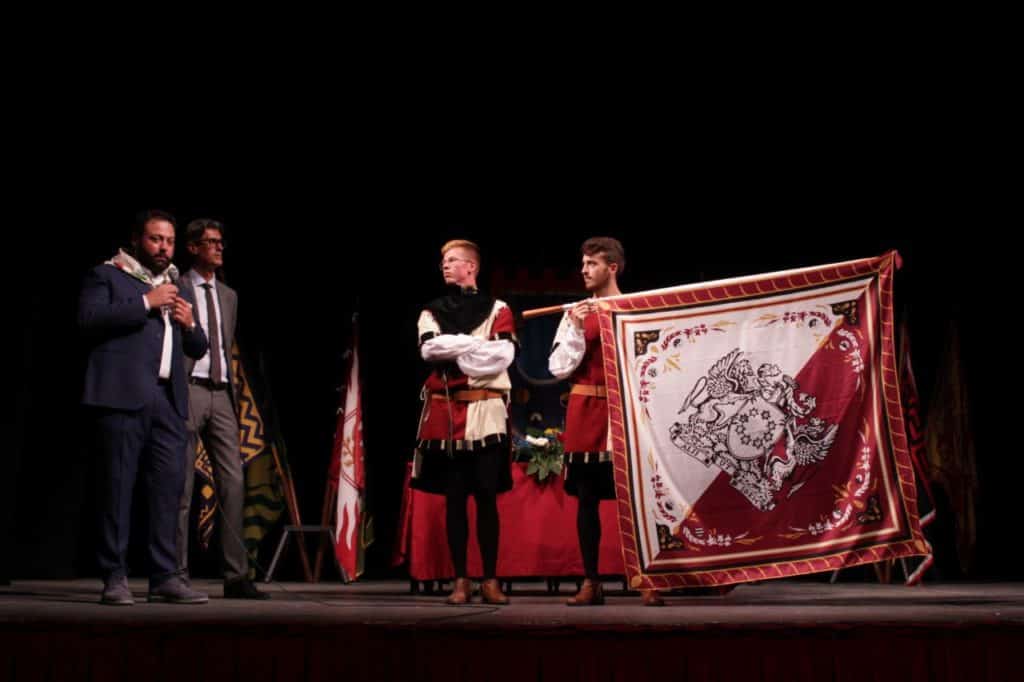 Subsequently, the delivery of the “Grifo Poliziano” took place, dedicated to the personalities who distinguished themselves for their commitment in the enhancement of Montepulciano internationally; this year the prize was awarded to the Compagnia Popolare del Bruscello Poliziano which for eighty years has maintained the cultural tradition of the local popular theater and which spreads the image of the city in Italy and throughout the world.

As usual, the afternoon appointment at the Poliziano Theater was also dedicated to the awards of the food and wine competition “At the Table with the Noble”, now in its seventeenth edition and organized by the Consorzio del Vino Nobile di Montepulciano. The districts challenged each other in the kitchen to create original recipes that combined the typical wine of the area with a traditional local dish, identified this year in Chianina meat. The recipes, particularly focused on the use of the poor cuts of the “White Giant” characterizing the Valdichiana, have been judged by a jury of international journalists and food bloggers chaired by Tinto, radio commentator of Radio2 and by Bruno Gambacorta, creator of the competition. The prize was won by the district of San Donato with chianina tripe, followed by the districts of Collazzi and Talosa. The dishes of the competition will be available to all guests in the respective gastronomic stands of the districts during the week of the events of Bravìo delle Botti.

On Sunday evening the night trials of the pushers also began, which will be held every evening starting at 9 pm; throughout the week the districts of Montepulciano will be open, with dinners, entertainment and live music. To celebrate the dedication of this edition of the Bravìo delle Botti to the moon landing, also on Sunday evening, an observation of the moon took place in the San Biagio meadow by the Poliziana Astronomical Society.

The cloth dedicated to Sant’Agnese was presented→